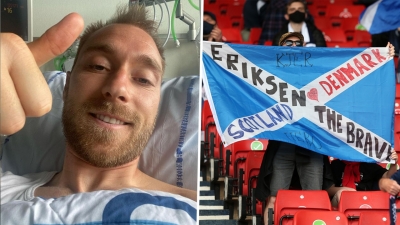 Scunthorpe United have given Jordan Hallam a 2-year deal.

Another 2-year contract has been given to Kian Scales by Bradford City.

Defender Connor Wood has signed for Leyton Orient on a free transfer from Bradford City.

The best name in football has returned to Wigan Athletic, after Max Power was released by Sunderland.

Hull City midfielder Callum Jones has signed for Morecambe on loan for the season.

MK Dons have completed the signing of Argentine goalkeeper Franco Ravizzoli on a free transfer after being given international clearance.

Defender Ryan Sweeney has joined Dundee on a free transfer from Mansfield Town.

Former England left-back Danny Rose has signed for Watford on a free transfer from Tottenham Hotspur.

Real Madrid have confirmed the departure of long-serving captain Sergio Ramos on a free transfer.

France are facing an inquiry by UEFA and Fifpro after defender Benjamin Pavard was allowed to carry on playing following a brief moment of unconsciousness. Pavard said after the match: “I took a hell of a shock. I was a little knocked out for 10 to 15 seconds. After that it was better.”

Belgium v Denmark is planned to be stopped in the 10th minute as the teams have agreed to put the ball into touch so that they can take part in a minute’s applause for Denmark’s Christian Eriksen. Eriksen usually wears the number 10 shirt for Denmark.

Scotland and Arsenal defender Kieran Tierney is “touch and go” to face England tomorrow, while England’s Harry ‘Slabhead’ Maguire has already pronounced himself fit in further good news for the Scots.

Former Scotland international Steven Naismith has hung up his boots and become player development manager at Heart of Midlothian.

After less than 3 weeks in charge, Abdellatif Salef has been sacked by Somalia. Salef’s team lost a friendly to Djibouti just before his sacking. A Somali Football Federation statement said it felt “that the coach is ‘undisciplined’ and doesn’t possess the professionalism that a national team coach should have.”

Austria forward Marko Arnautovic has been suspended for just one game after commenting towards opponents with Albanian roots that he “fucked your Albanian mother” after scoring against North Macedonia. Arnautovic has responded by saying he is “not a racist” and was only found guilty of “insulting another player”, with UEFA deciding his actions were not discriminatory, even though he deliberately targeted two players of Albanian extraction.

Hungary fans displayed a homophobic banner throughout the match against Portugal which UEFA are now investigating after pictures of the flag involved were circulated on social media.

Video: Ronaldo shrugs off pitch invader that grabbed at Man Utd star’s shirt before stewards race to wrestle him to the ground