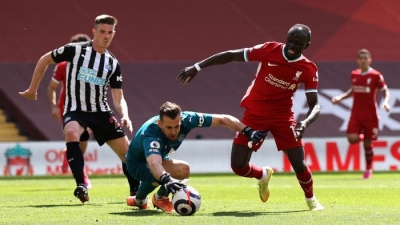 Become a Patron! Help us to continue to provide these articles by becoming a Patron please.

The more things change, the more they stay the same. Once again Liverpool create a multitude of chances, waste most of them and throw away a win because of it. A game they dominated and should have walked away from with a comfortable win and the only people to blame for not doing so was themselves. Even the normally clinical Jota was struggling badly to kick the ball in the right direction when in front of goal, let alone put it into the back of the net.

There were long periods Liverpool controlled the play without creating anything, but each time they did move the ball forward, they seemed to create a shooting chance. The worrying thing is that it was dithering from players in a good position to shoot that cost most of the chances. There were so many times I found myself shouting “just bloody shoot will you”, while the player would take another touch, then another and then pass or lose the ball altogether.

The last few seasons the lack of a quality clinical finisher has not been a problem because of the high press meaning the chances that were arriving were of such high quality that goals came regularly anyway. The biggest worry for me is that, since signing an actual finisher in Jota, the press has vanished and the quality of chances has consequently dropped. In part the problem is that Jota rarely presses, the one time he did in this game he won the ball deep in the Newcastle half and caused a very dangerous situation. While the players can become more clinical through coaching, and it does need to be looked at, for me it is imperative that Klopp gets the high press working once more. The quality of chances that creates is so high that it makes scoring much easier.

They came with a plan to sit back and soak up pressure hoping to hit on the break and, while it produced a decent result from their viewpoint, it must be said that it is difficult to say it actually worked. They were opened up with ease and were wide open, even to balls in behind, which is absolutely criminal for a team utilising the low block. Their defending was, at best, poor, and they should have conceded a hatfull of goals. On that basis I have to say that really, in this particular game, they got away with it, rather than earnt it.

All that said, you have to give them credit for keeping on going and not accepting defeat. Also that they were robbed by a silly rule of their first goal. Was it really a clear and obvious error by the referee to miss that? If not why was VAR intervening? Maybe the PGMOL should just throw the football lawbook away, as it is clear they are not taking any notice of it and are just running the game by their own rules. Often making them up as they go along on a game-by-game basis. Can we not just put Mike Riley out of my misery?

Anyway, back to actual football, I have to question Steve Bruce’s tactics, which always seem to be the same: passive for 75 minutes and then act. They sit back and apply no pressure on the ball at all until the final 15 minutes and then they become a genuine threat and make it an even game. So why not do that sooner and give opponents a game for 90 minutes instead of 15? He might even find the fans would warm to him if he put a team out to try and win the game from the start.

Klopp – I can understand the decision to play Fabinho at the back once more with Phillips out injured, but it is clear it does not work. But when the option is Williams, with absolutely no pace or reading of the game, up against St-Maximin, I can see little in the way of option. The mistake for me was taking off Thiago, he was running the game, controlling the play and that was crucial when the lead is such a narrow one. Surely the better option would have been to take off the continously ineffectual Wijnaldum and use Milner and Thiago as a double pivot behind Jones?

Easy to say with hindsight I know, but even at the time I could not understand the decision when Thiago was playing so well, while Wijnaldum was barely playing. Unless Thiago was carrying a problem, the choice was a strange one as he was the centre of everything Liverpool were doing. Once he went off Liverpool were unable to get themselves sorted out and Newcastle were able to take over.

Alisson – looked much more like himself than he has done in recent weeks. The hair and beard are almost back to normal and his play is getting there too.

Alexander-Arnold – some of his balls into the box were incredible, the most incredible thing being no one managed to score from them. These are balls that make it easier to score than not, but no one is making the right runs and when they do make a run they are fluffing easy chances. I am not sure what more he can do than put the ball on a sixpence for anyone who actually attacks it.

Also defended well at times, showing good awareness to drop onto the line, though it was offside anyway, to clear one Newcastle attempt. He does still have a tendency to be a bit lazy when coming out to close down a player in a position to cross. I understand the desire not to sprint out and make it easy for the man to just go past him the other way leaving him miles out of position. It is not that I am referring to, it is the lazy jump in the air, usually turning his back, to attempt to block a potential cross. Face it up and get hit in the face if necessary, because the moment you turn your back you are out of the game and have no idea where the ball is or what is happening with it.

Fabinho – he is not a central defender and it shows time and time again. Far too often he sells himself needlessly in a challenge that he has no need to make, usually in the opposition half where there is absolutely no chance of him ever recovering in time to make a difference. What Fabinho is brilliant at is staying on his feet and just poking a leg in to take the ball away from an opponent, but he rarely does that in defence. Usually because he has been caught by a run in behind. In his midfield role, he does not have to be aware of those, as they are passed on to the defenders behind him, in defence he needs to spot them and prepare for them.

Kabak – one-on-one defending was very good from Kabak, he was able to deal with a number of those situations well. But, and it is a big but, the big weakness Liverpool have is in being caught in behind and he is a massive culprit in that regard. Most attacks against the team come from longer balls played over the top of the centre-backs for opposing forwards or midfielders to run onto. Because of that, the key asset that is needed in a Liverpool centre-back should be an ability to read those balls and deal with them and the runs. Kabak shows no sign of improvement in that respect, so I have to question if he is the right player for the club for the long term.

Robertson – a mixed game for Robertson. Some of the work and pressing he did was exceptional, stealing the ball and charging forward, though he could have done better with the shot. But it was mixed between some heavy touches and lack of awareness defensively.

Thiago – one of the best players on the pitch, controlling the play from kick off until he was subbed. Some of his passes were a delight to behold and it gave Newcastle a lift when he went off. It also helps that he is better positionally than both Jones and Wijnaldum, often being in the right place to pick off loose balls due to using his experience and intelligence. Without him, the midfield was very open.

Wijnaldum – at the beginning he showed excellent defensive awareness to cover behind the defence, which shows he does have the capacity to spot when he is needed to drop back. The question has to be asked, why is it just one instance in pretty much the entire season that he has shown any kind of inclination or awareness, despite spending a large portion in a defensive midfield role?

Mane – he was physical and worked hard, but his touch was off and he could not have been any worse in front of goal if he was trying to be. Mane’s shooting was terrible and then when he got one-on-one with the keeper, he just dithered and allowed the keeper to get the ball. Awful performance and was probably the worst culprit in front of goal.

Firmino – his hold up play was excellent, he was getting on the ball, dancing away from opponents effortlessly and his movement was very good too. Sadly it was let down by his passing, which was very loose and his finishing, which was poor. Not a good day for him.

Salah – did brilliantly with his goal and everything apart from his shooting after that was excellent. He was creating chances, winning the ball back, breaking up counters, linking up play and generally was very good. Right up until he got a sight of the goalposts, when he fluffed every other shot he got.

Jota – a bad day at the office for Jota. Apart from one moment when he decided to finally do some pressing and won the ball back after hounding a Newcastle player, his game was awful. His touch was poor, his passing was poor, his movement, everything was just not there. His insistence on constantly trying to take Murphy on for pace was frustrating, as it was clear Murphy had the beating of him in a footrace. Jota is beginning to look like one of those players who is sensational against tired legs as a sub but struggles to play from the start. I am sure he is more than just an impact sub, but it could become a psychological burden on him if he does not get over it soon.

Milner – replaced Jota in the 58th minute. Did not have a particularly bad game, in fact he had a good shot which Dubravka did well to stop as he saw it late, but after Thiago went off Liverpool could have done with him just sitting in front of the backline and providing protection. His tendency to charge about trying to be everywhere was not what the team needed at the time.

Jones – came on in place of Thiago in the 77th minute. Showed good movement but he is not ready to control the tempo and Newcastle raised their game in response to Thiago going off. It left Jones really unable to get his game going.

Become a Patron! With the pandemic around your support to continue writing these articles is needed. Thank you.