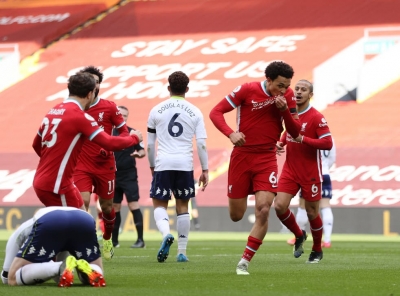 Become a Patron! Help us to continue to provide these articles by becoming a Patron please.

An interesting and intriguing game, despite VAR’s very best efforts to ruin yet another game, and, despite Liverpool’s domination of possession, finely balanced all the way through. Watkins was always a threat to a Liverpool defence that is just beginning to come together after far too many changes through the season. Liverpool were much closer to the form of last season than this, but that lack of a clinical edge is still a problem.

The key to it all seems to be the press, it was much more in evidence than it has been throughout the season, which allowed Liverpool to constantly regain possession high up the pitch and maintain pressure. Then their goal came from a lack of pressure, Wijnaldum caught on the wrong side of McGinn, making no real effort to put pressure on him on the ball and allowing him to play a through ball to Watkins. Then a mistake by Alisson allowed the ball to end up in the back of the net to put Liverpool behind once again.

With the struggles Liverpool have been having in front of goal in recent months, particularly at Anfield, it could easily have been game over, especially as VAR disallowed a perfectly good goal for a non-existent offside, right on half-time. The way the season has been going, it would have been easy for Liverpool players to fold and it all go wrong once again, but they kept going. And going. And going. Right to the end when they got the winner. It showed the spirit and desire is still there from last season, just waiting to emerge once more.

Villa were always a threat, though at times it was to themselves with a large number of unforced errors which nearly cost them. They were second best throughout, but they never made it easy and continued to look to win the game right to the end. At times they were forced back, but they never let themselves get stuck into just holding on. There were definite signs of a team growing together there as a team.

Klopp – while I was not convinced by the decision to start Wijnaldum once again, it worked out alright in the end. Hard to argue with his choices after the win, though I do worry that Robertson is being run into the ground and is desperately in need of a rest.

Alisson – he had a mostly good game, but sadly he did let the goal in, when he should have saved it and that will be what his game is remembered for. Thus is the life of a goalkeeper.

Alexander-Arnold – apart from a couple of moments, Alexander-Arnold’s defending was much better in this match than it is said to be, his covering play helped out when needed. Most importantly of all, he contributed so much going forward, the ball in for Fimino’s goal which was ruled out and in particular that beautiful goal right at the end.

Phillips – does a good solid, uncomplicated job at the back and there are signs that he is finally earning Klopp’s trust, with the choice always being to take off Kabak when a goal is needed rather than him. He is never going to be van Dijk, but he is certainly good enough to cover when called upon.

Kabak – still looks a little slow to react and his pace is worryingly non-existent. There was also a few loose passes from him in this match, in fact his play overall was quite sloppy, from the start when he and Robertson failed to react to a ball over the top and then, when he did get to it, allowing McGinn to muscle him aside. Like Phillips he is good enough to do a job but he has yet to show enough to make himself look worthy of money being spent on signing him. He has a gfew more games yet to earn his move though.

Robertson – looks tired and jaded. He still offers so much it is easy to see why Klopp is loath to rest him, but it is clear that he needs a break desperately to get that little extra back he had in the early weeks of the season.

Fabinho – as usual his presence in midfield is a highly reassuring presence and he is often key to breaking up attacks before they can even begin.

Wijnaldum – better than he has been in recent weeks, but still there was a lazy, weak non-attempt to put pressure on McGinn which ended in their goal. Going forward he is a quality midfielder but whenever he is asked to defend he becomes a very weak link, offering little help to the press and no positional sense to help protect the defence.

Milner – provided energy and aggression, which was badly needed, but was careful not to over-extend himself in this match.

Firmino – he must be gutted that his perfectly good goal, which was well-taken, was ruled out. Overall he looked on his way back to his best, with some very nice link up play and good balls played.

Salah – was heavily involved right from the start of play and scored yet again, though should have scored more. He is the big threat for opponents though and he is always keeping at least two players occupied.

Jota – after initially being at fault for losing possession far too easily after Alexander-Arnold won back possession, his game improved massively. He showed much better link-up play and even played an excellent pass, when passing is normally one of the weakest points of his game. This game just highlighted that he can bring more to the team than just goals and that Jota has the potential to be a key contributor even in games he fails to score in.

Thiago – replaced Wijnaldum in the 70th minute. Controlled possession and gets much more involved in the game than Wijnaldum was doing. While he is not the best defensively, he is very good at getting himself into a position to help out, even if it does often lead to him giving away silly free kicks, this game he managed to avoid the fouls and was able to just help keep pressure on.

Mane – came on in place of Firmino in the 75th minute. He was very poor, his touch was shocking and should have played the ball across for a tap-in when Shaqiri played a lovely through ball to him. Instead he shot straight at the keeper and wasted the opportunity. His decision-making has been appalling over the last few weeks.

Shaqiri took Kabak’s place in the 89th minute. Hardly had time to do much but he did play a lovely ball to Mane, who should have done better.

Become a Patron! With the pandemic around your support to continue writing these articles is needed. Thank you.