Uche Mefor, the estranged Deputy-Leader of the Indigenous People of Biafra (IPOB) on Sunday challenged the leader of the outlawed group, Nnamdi Kanu, to a public oath to prove that he has never collected money from any Nigerian politician.

One of the reasons Mefor’s relationship with Kanu hit the rocks was because he disagreed with the Umuahia, Abia State-born pro-Biafra political activist on the modus operandi of the controversial organization.

IPOB is canvassing for the secession of Eastern Nigeria.

Taking to his known Facebook page, Mefor insinuates Kanu is a hypocrite.

“If Nnamdi Kanu is righteous and whiter than white as he claims, l challenge him to a public oath anywhere and by every means that he never took money from any politician and never worked with them as he falsely accuses others,” Mefor wrote. 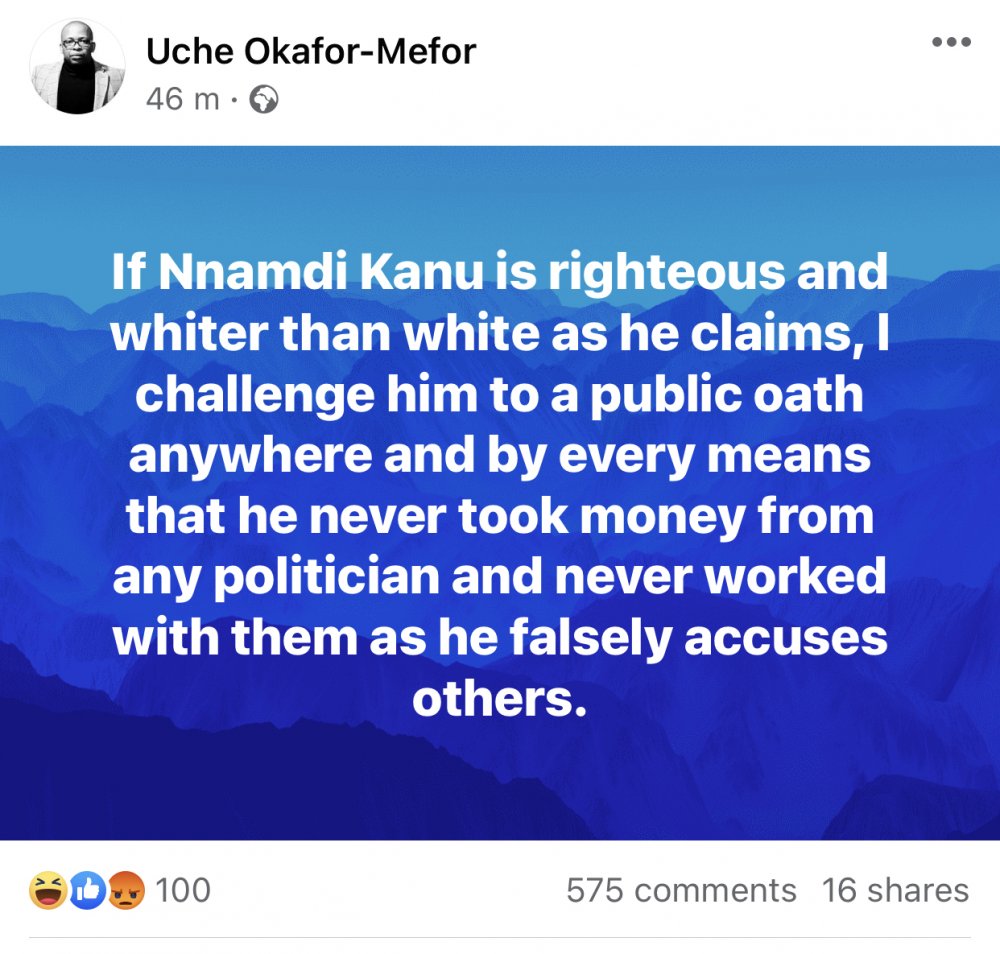 Meanwhile, Mefor on Saturday maintained that Kanu “betrayed himself by presiding over and inspiring a system of lying, demonizing and blackmailing genuine people around him”.

Mefor was responding to a post by a supporter of Kanu who aimed a jibe at him.

The spiritual implications of Kanu’s treachery shall boomerang in the physical and it is already manifesting to such an extent that pretence and blackmail will even make it clearer. You may try to kick and kill those you perceive as real and imagined enemies but this will not stop nature to take its course.

I take this post below by a misguided lost soul inspired by Kanu as a trajectory and an excursion into the mindset of Kanu himself and then his commissioned, brainwashed , extremists followers and those native doctors and fake seers within and outside IPOB that delivered only ‘bad/evil fortunes’ and that that finally turned him into a monster that was and is still busy destroying every genuine  persons around him who were advising him sincerely and conscientiously. They badly deceived and led you astray, Kanu.

In the midst of all these, therefore, the ultimate question is : if many of us who sacrificed our reputation and risked everything to protect Kanu, made enemies because of Kanu, preserve IPOB, and kept it intact when Kanu was in prison (and despite that no decision was taken without his knowledge and  approval ), IPOB under Kanu would have been non-existent and Kanu would not have been where he is today.

KANU, I ONCE OR TWICE TOLD YOU THAT THE DAY I AM NO LONGER AROUND YOU, THAT’S WHEN YOU WOULD KNOW THE DEPENDABLE ALLY YOU HAVE IN ME.

If Kanu was not betrayed when he was helpless, is it when he has his total freedom that he would be betrayed? Truth is that Kanu betrayed himself by presiding over and inspiring a system of  lying, demonizing and blackmailing genuine people around him (putting them in harm’s way) ; and the implications of that betrayal remain indeterminate. 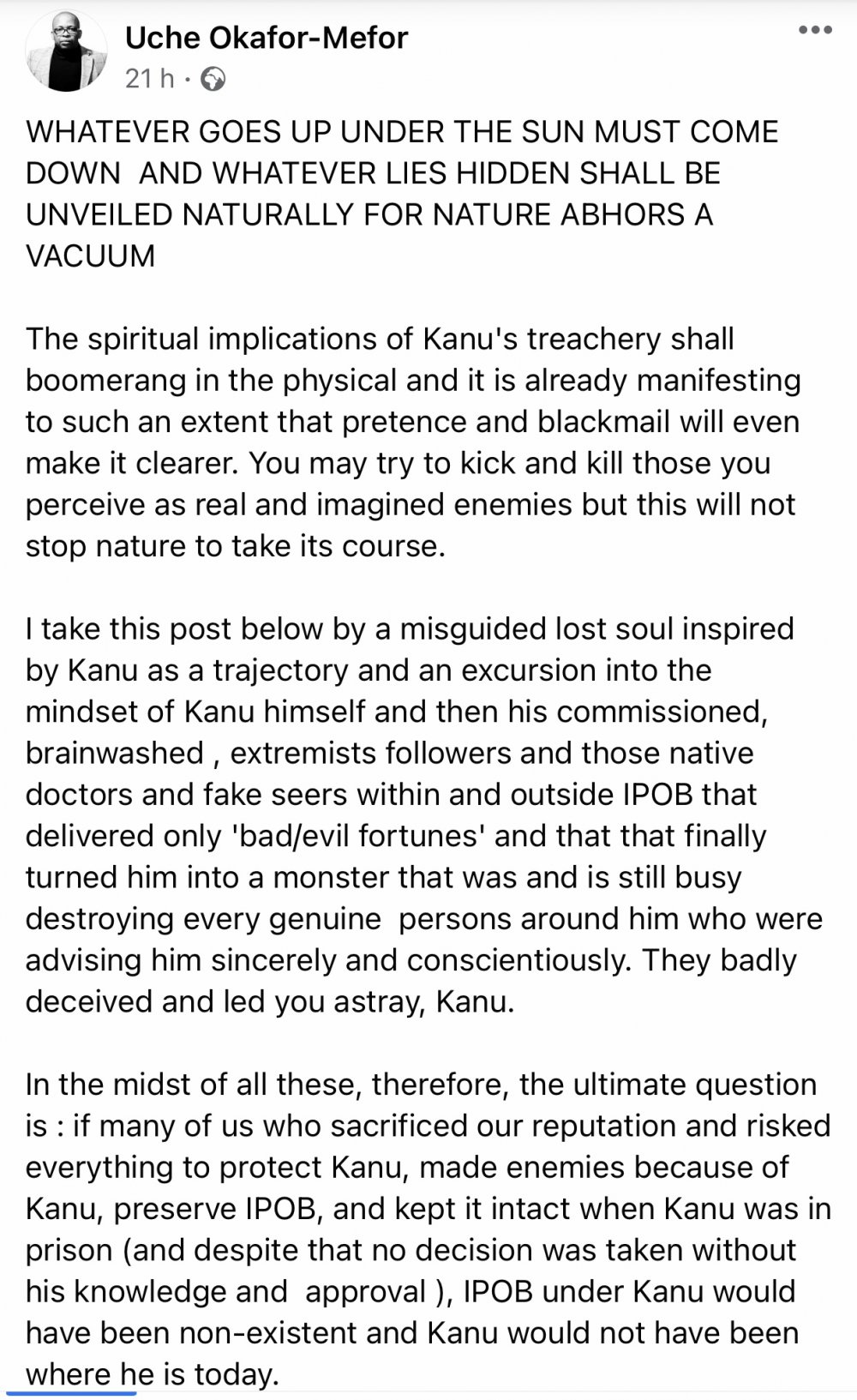 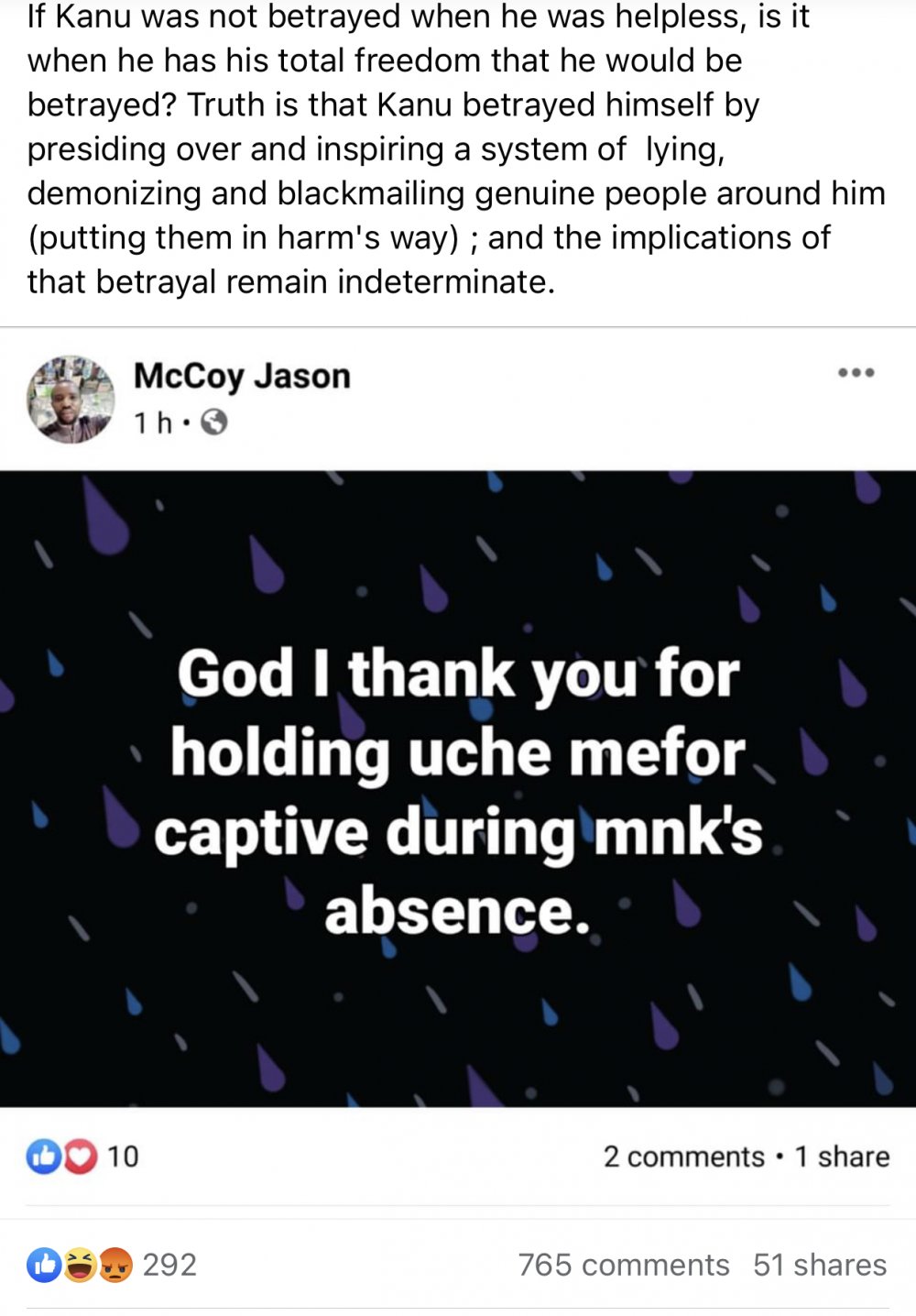 Sen. Warren, other Dems revive legislation to crack down on private-equity buyouts